In my life as a teaching pro, taking on a new student was a big commitment.

In my mind, saying yes meant my student and I were going to be in each other’s lives for many, many years.

That had all sorts of benefits.

One, it took most of the emotion out of it. It didn’t matter if she lost in a tournament today. We have years to fix things and improve. You can’t make every match a life or death situation. If you do, as a great coach once said, you’ll be dead a lot. A long-term relationship takes this mostly off the table.

Two, it allowed us to make a plan. When we’re just trying to survive the fire right in front our faces, there’s no thinking about tomorrow. There’s no vision. There’s only, “Put out that fire!” If you’re just trying a coach out for the short-term, that coach is gone after the first loss. Rags to riches stories take time. There is no time when you’re judging moment to moment.

The students who were around a long time did some amazing things. There’s power in the long-term.

Which is no different than how Jeff Bezos treated Amazon. He was famous for saying he always thinks “three years out”.

He had a long-term plan.

A short-term mediocre quarter or a dip in the stock price didn’t mean much. He didn’t stop and put out that immediate fire.

His goals were three years down the line.

The same is true for trading.

The long-term view (with short-term memory loss) is one of the most important tools we need in our arsenal.

If we are worried about what happened in today’s trade, we’re toast. We’ll run around like a crazy person trying to fix a “broken” system even though it’s not broken. It didn’t make money today, sure, but it will make money overall when we check it in three years.

Today doesn’t matter when we have a long-term plan.

For example, here’s a new system that we’re going to discuss in our next Newsletter. It doesn’t win all the time. But it’s based on principles that have been proven to work over the long haul.

Check out the annual returns: 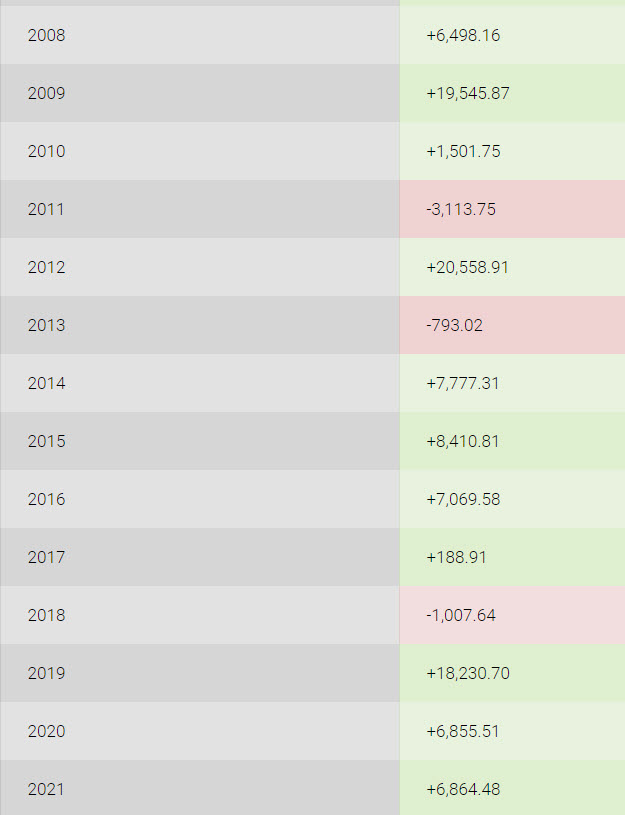 There are hypothetical losing years. And a short-term mindset would throw this system in the toilet, probably long before the losing year was even over.

But what happens if we take Amazon’s 3-year viewpoint?

If you think in 3-year chunks, then we’d always be profitable, even with a losing year.

Even with two losing years.

A long-term view makes us money.

That’s why it’s such a big weapon.