In an eat-what-you-kill world, it’s understandable.

So, naturally, pro tennis players can be greedy locusts, gobbling up every tournament opportunity they can find.

And if they play almost every week (and win matches each time), they will definitely get paid. More tournaments means a higher annual salary.

Unless playing so much leads to burnout and injury.

In that case, making more money can ruin a career.

Traders are obsessed with money.

They desperately search for any system (from any source) that promises a lot of profit.

But they don’t pay attention to how they get that profit.

For example, here’s the Performance of a Bollinger Band™ system (we talked about this last week).

But if we double to the move to break-even (in other words, if we make the trade be twice as profitable before moving our stop to break-even), we make more money. By waiting longer we hypothetically produce $197,000 with a smaller max drawdown of -$23,502. That’s a profit to drawdown ratio of 8.38.

The longer wait to break-even makes more money and has a better profit to drawdown ratio.

We should choose the one that makes more money, right?

Here’s the problem. The one that makes more money has big losing years: 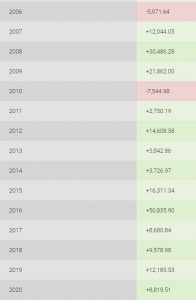 Granted, it hasn’t had a hypothetical losing year in a decade, but when it loses, it loses pretty substantially.

Here are the annual returns of the same system that makes less money: 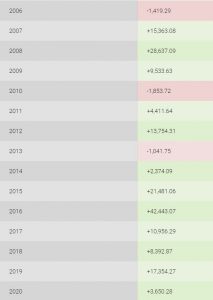 A big losing year (or two) could end a trading career. Amateur traders probably couldn’t come back from that devastation.

Instead of playing more tournaments, a player could play less and focus her energy. Having time to recuperate after losing could lead to going deeper into the tournaments she does decide to play.

Being able to shrug off a small losing period will lead to the big eventual profits looming in the years to come.

More is not always better.

Many times, it’s a lot worse.