Is Weekly Pivot my “Best” Robot?

On Monday, we answer the reader question, “What is your best robot?”

The answer, as you recall, was The Weekly Pivot Robot.

Is it the most profitable robot? No.

Is it the most robust robot? Yes. So far, at least.

It’s the most robust because I’ve traded it live or watched it trade unchanged since 2015. I can’t say that about any other robot I trade.

So, why is it robust?

Everything in life reverts to the mean. It always has and always will.

In trading, everything reverts to its Weekly Pivot level. It always has (thus far) and always will (probably).

Betting on an instrument coming back to its “fair value” is something that will never go out of style. Here’s how the original Weekly Pivot robot does it:

Well, this system hasn’t been changed in about 6 years now. And here is the Performance Report since 2015 (trading 0.75 lots each time with no compounding): 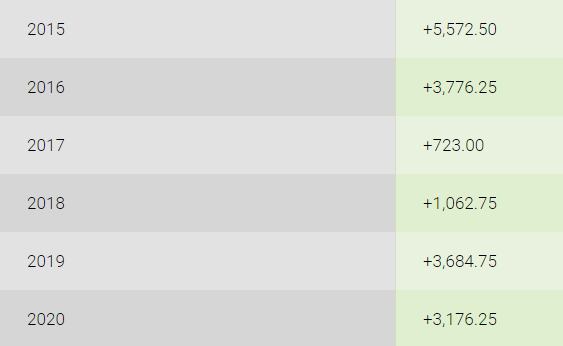 So, is this system over-optimized? Or is it robust?

It uses a timeless fundamental, hasn’t been changed since it was made, and has no hypothetical losing years since 2015.

Is it perfect? No. Does testing show losing years? Yes. Will a reversion-to-the-mean strategy ever produce as much profit as a trend following strategy? Almost certainly not.

But it’s hard to argue against a fundamentally-sound system that’s produced hypothetical performance like that.

In our next Newsletter, we’ll go even further. We’ll see if we can create more profit.