24 Oct Is Stochastics The Solution To Trading-For-A-Living?

Posted at 16:00h in Trading Blog by Scott Welsh

Is Stochastics The Solution To Trading-For-A-Living?

For a long time, I’ve been obsessed with trading-for-a-living.

It’s why I’ve been doing all this research over the years and it’s the reason I write this newsletter.

But what does that really mean?

How do we get out of the hypothetical idea of trading-for-a-living and make a plan?

As with any goal, a great first step is to model someone who’s already been doing the thing you want to be doing. That’s what the experts would tell you to do.

So, is there anyone out there publicly trading-for-a-living?

Yes–and we’ve talked about him before. His name is Mr. Money Mustache.

If you don’t know, the short version is that he and his wife saved money, cut unnecessary expenses, and now live off their trading income. And they’ve been doing this for many years now. It’s the most public, easy-to-follow example we have out there of someone trading-for-a-living.

The problem is that he doesn’t trade like you want him to.

He doesn’t trade at all, actually. He invests in Index Funds. And the profits of his Index Funds pay all of his family’s expenses year after year. Isn’t that what we’re all trying to do?

If the market is up, then when he takes out money for expenses, he has some money left over. If the market is down, he still takes money out each year and sees his principal decrease. Over time, it’s all evened out, his bills are paid, and his principal is cranking along just fine. Again, isn’t this exactly where we all want to be?

But what kind of numbers are we talking about specifically?

Well, since 2008, the market has averaged 10.2% per year. That’s the benchmark. That’s the amount of return he needs to easily trade-for-a-living. That’s what Index Funds have provided.

If we can beat that mark, then we can start having a real conversation about living off our trading income. Maybe we’ve saved enough, maybe we are still working on it. But if we can beat the number of someone living the dream, then we’ve moved one step closer.

How should we try to do it?

Let’s start with long-term trading (because that’s how Mr. Money Mustache does it). And let’s use basic indicators (because that means anyone can do it).

My indicator of choice (for now) is Stochastics. As you know, Stochastics has been around a while and that basic indicator is effective. And let’s use Forex because that’s what I get the most requests about.

We’ll start off the week using USDJPY (one of the “big 3” currency pairs).

Here are the details:

The Performance Report is here: 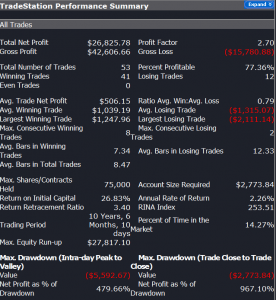 What tends to get lost when thinking about Index Funds is that the market can suffer huge drops. An Index Fund seems safe, but Index Funds can drop up to 50% in a single year (as we saw in 2008-09). That being the case, I accepted a 50%-ish drawdown from the USDJPY using Stochastics.

If we accept that much drawdown (and that’s up to each trader), then we definitely produced more profit than an Index Fund.

With no compounding or anything fancy, according to Tradestation the USDJPY with Stochastics produced more than twice as much as the market would have.

I think that’s a good start. It’s repeatable, accessible, and hypothetically better than the market.

If you’re on the email list, we’ll explore adding a few more instruments into the mix. Looking forward to that.

To see the weekly YouTube video on this system, go here.