12 Sep This Week: The Crazy World of Trading Gold

Posted at 17:04h in Trading Blog by Scott Welsh

This Week: The Crazy World of Trading Gold

After our discussion on the Keltner Channel system, I got some requests about Gold.

So let’s take a look!

The first thing to notice is that Gold is a wild one. It trends like crazy–in both directions. People get very emotional about Gold, going hyper-bullish at times and sky-is-falling bearish at other times. It’s nice to be on the right side but scary if it’s going the wrong way.

It’s very hard to be a casual trader and trade Gold.

So, once again, I applied the default settings to Gold and here’s the Performance Report: 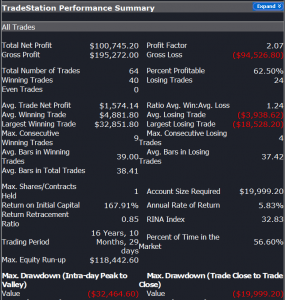 As you can see, it generates a lot of profit. But it also creates a lot of drawdown. Here are the details of this system:

I did not use a stoploss or a target on Gold. I just let it run wild.

But I did use a timed exit– enough was enough on some on these runs. I came up with 37 bars after doing some testing (you might know that I like holding periods of 30-60 bars on Daily charts).

And according to Tradestation, trading Gold this way was more profitable than buying-and-holding over the same period.

In addition, the Keltner system produced just one-third of the drawdown of buy-and-hold.

I think there are ways we could improve this system, but, as it stands, it makes money and beats buy-and-hold substantially.

To see the weekly YouTube video that talks about trading Gold on the Keltner system, go here.