07 Nov The Dark Side Of The Robot

Posted at 17:00h in Trading Blog by Scott Welsh

The Dark Side Of The Robot

This is how my morning began today. After crawling out of bed, I made my way over to the computer to see how my GBPCHF trade had fared overnight. Then I was rudely greeted with,

“Excuse me, sir, I need to discuss something with you…”

And then the Robot showed me this: 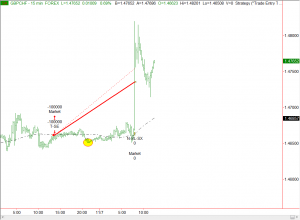 In case you’re scoring at home, this was a short trade which means we don’t like seeing that big red stop-out line going almost straight up the wrong way. What’s even more fantastic  is that price was moving so fast that my exit was 20 pips worse than the stop loss was supposed to be. See that little dashed line above the solid red line? That’s my actual exit as opposed to where the Robot promised to exit (thick red line) . Real bang-up job there, Robot. Nice work.

As you know, my preferred method of trading is automated trading. And I when I say preferred, I mean that in the same way that Lance Armstrong preferred to use PEDs when competing in the Tour de France. But just because it’s my preferred method (and arguably the best method, see: Man v. Robot), that doesn’t mean that there isn’t a down side of using a Robot. Today’s trade showed that down side.

The first down side is that it trades overnight.

True, it’s some kind of wonderful when you wake up and see one or more successful trades completed while you slept. That’s the good life. On the other hand, some people might not sleep all that great when they know a trade is on. A discretionary trader doesn’t have to deal with that; he can just close up shop and go to bed.

Of course, you could tell your Robot to close out trades when you go to bed or test different time frames. But here’s a secret: it’s more profitable to trade overnight and not close out.

The other big downside is that this GBPCHF trade almost worked out fine. Can you see the tiny ellipse right around 21:00 EST in my chart? That was where the trade had traveled 99.9% of the way to its target. A human could have seen that it was a 99% successful trade and just closed it out, and a human would have been right. By closing it out when it had nearly made it all the way, a human would have $1,000 more in his trading account right now.

To wake up and see a $1,000 swing the wrong way because you trusted the Robot, that’s a rough one.

Here’s the problem, though. If a human starts taking trades out when it almost makes the target, he is opening a big Pandora’s Box of problems. Who’s to say that a human should take it out when it’s only 80% to its target? How about 70%? No one goes broke taking a profit, so why not?

The reason not to is because it may only seem like a few dollars here and there, but it slowly begins to add up. On a system that trades every day, just $50 bucks a day lost by closing out early means you’ll have $15,000 less profit at the end of the year.  That can make the difference in retiring early or not.

So, as angry as I was this morning, I am sticking by the Robot. I can do that because here is the Performance Chart of the GBPCHF over 10 years: 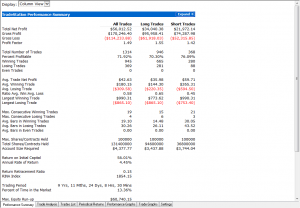 If I stick with the Robot, I get that performance. If I start taking trades out early, who knows what I’ll get?

The Robot has a dark side, no doubt about it. But it’s worth it.

Sir, you don’t know the power of the dark side.